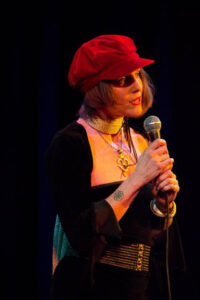 Blake More is a writer, dancer, movement teacher and performance artist who combines poetry, costume, video, painting and dance.  She has performed in Tokyo, Amsterdam, New York, Los Angeles, and all over the Bay Area. Her freelance writings have appeared in Yoga Journal, Utne Reader, and Tokyo Time Out. She has written two non-fiction books, one fiction book, and three books of poetry. She also teaches poetry through California Poets In the Schools, organizes and hosts a p&w sponsored poetry and jazz series, and hosts poetry show called Cartwheels on the Sky on KGUA FM. She has been a certified yoga instructor since 1996, and you can find out more about her at bmoreyou.net.

Yelapa is wet in October
Google says it isn’t
or at least, isn’t supposed to be
it is the start of the tourist season
but here I am in paradise
no walls
surrounded by downpour

it is fun for a day, two days even
everything reaching toward me
as if begging to be immortalized on facebook
a waterfall cascades into the seasonal creek from the canyon above
the ocean exhales a mere 50 stairs down
lush vines, fronds, flowers drape around limbs
and green, everything green,
peaceful green, serene green, alive green

now I understand
why nobody’s here

good thing
because I smell like Peter’s dog
I remind myself, this will change
it will dry up soon, November 1st according to locals
but my shirts and shorts are growing fungus
in embarrassing places

oh and speaking of bugs
did you know that they, unlike me, run riot in this clammy soup
for one full day, the ants and their friends
conduct a pink and green parade across the adobe tile
hoisting confetti-sized pieces of bougainvillea
toward some unknown destination
today I leave my breakfast on the counter
long enough to go pee
and return to a full-blown ant rave
good thing I’m not vegan

as if on cue