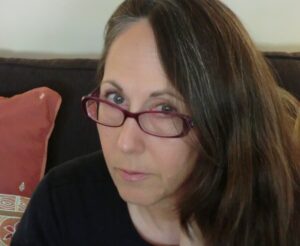 A poet, herbalist, and garden-tender, Christine’s poems meditate on our connections to each other and to the more-than-human world. Her poems have appeared or are upcoming in: Iron Horse Literary Review, Blueline, Manzanita Quarterly, Hamilton Stone Review, Reckoning, a journal of creative writing on environmental justice, Dark Matter: Women Witnessing, The Sand Hill Review, Downtown San Jose Magazine, and, in collaboration with David Cummings, in the online Writers Resist publication founded immediately after Trump was elected president. Her work has been anthologized in: Blue Arc West: An Anthology of California Poets, from Tebot Bach Press and Our Last Walk:  Using Poetry for Grieving and Remembering our Pets, from University Professors Press. The poem “The Koi at the Gaylord Palms Resort” won the Pennsylvania Poetry Society Charles Ferguson Award for an environmental poem. Christine has an MFA in poetry from Bennington College.

After the Padres came and built their mud houses
where they said, Dios vive, the people ate
God’s body, a flat white thing with no flavor,
and more: they learned to grow wheat for bread,

Rivers that had always gone their own way
were directed into ditches and ponds, sent
in channels to fields of strange new grasses.
The people used to choose their path

like water; now they hauled boulders,
un trabajo pesado, and cleared canals of silt.
After such hard labor, the Padres promised,
they would rest in El Cielo, where no one

goes hungry, no one works, and El Señor
would give back all they had lost.
When they sickened and died in great numbers,
they were glad at least that once again

Postcard from the Boundary Waters