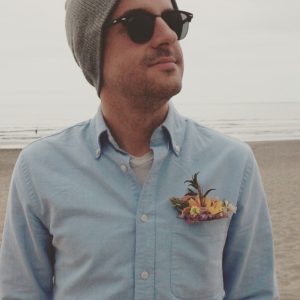 Brian Tierney is a former Wallace Stegner Fellow in poetry at Stanford University, and a graduate of the Bennington College MFA Writing Seminars. His work has appeared in or is forthcoming in: Kenyon Review, AGNI, New England Review, Best New Poets, Boston Review, and others. In 2013, he was named among Narrative Magazine‘s “30 Below 30” emerging writers, and is the 2018 winner of the George Bogin Memorial Award from the Poetry Society of America. He lives in north Oakland, and teaches poetry at The Writing Salon.

It starts at the end; the lights of cars

distorted to a burst, for a second

as they pass me

in the exhausted sweep of fog over Mars, PA, then Punxsutawney

here—the Turnpike in the rain. Cars pass & continue to

some of them, in Breezewood or Erie, where their lives have been
decided by now.

So my eyes sting O, The Glory & go dead. I pull over

outside Somerset; there’s a rodent broke-open, a pomegranate

to the butt of a hammer, its head

useless, even to birds. It hurts to look at,

as in blood-phlegm coughed up in a bathtub. Only the body knows.

My old man, the story goes,

right before he died, he shouldered the Windstar, pulled over

to phone her, me, anyone

on his way somewhere East of

Poquessing, a faint, red fingertip print smeared on the dash

as though someone had crushed a clover mite.

Coda With A Corpse Floating In The Patapsco

River—which means tide covered with froth—which means no
that isn’t the first snow
forming in his eyes when the fire crews find him on the south end
of Baltimore;
his knees like split grapefruits floe-slashed under fog the shippers
pass through

like the breath of a horse I saw, on its side, outside Lancaster
when I was nine

with my father, buying trinkets the Amish carved to pass their self-
denial even
fallen Catholics envy; & the eldest one, or most certainly one of
the elderly ones
hosing off the blood where the ankle of that indescribable heap broke
through cleanly,

leaving a spot in the grass, a tumor in a petscan
seen from above:
so you could look at the shape your inner blight had taken long before
your organs had

caught up to your mourning what’d always been dying & unkeepable
anyway. Like a battery
I find floating. A father. It’s never
about the horse—